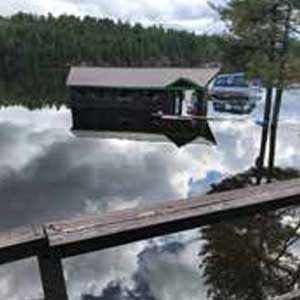 Thank you to all of our retuning and new guests for visiting. 2019 season was our best to date. We were very happy to host guests from Canada, The United States, Ireland, Germany, China, Mexico and St. Maarten.

The lodge is all closed up. The first day of snow was Nov 1 which was declared a “snow day”. As of the end of November we already had 4 snow days, a pile of snow, a melt and another pile of snow.

It is hard to believe our family is reporting on our 45th year in operation. Again, we had a great year, despite an extremely challenging start. Ice went out early enough and the water level was high but manageable upon arrival. Then one week after opening an extreme situation occurred. Seen here is our boathouse on May 29. The French River was declared a state of emergency with water levels far beyond the flood limits. It was due to extreme snow run off throughout the province. This resulted in a flood of 1 1/2 feet in the boathouse “breezy way” and we needed to use a canoe to access it. The road to cabins 12/14/15/16 was completely washed out making those cabins accessible by boat only. The biggest operational inconvenience, not to mention major expense, was having to travel to town every day to fill gas tanks because we could not pump fuel. We tried to make it as transparent as possible to guests but it was a real struggle for staff. The very worst part – no boat house gatherings! This was the worst flood the French River has seen on record.

We finally saw relief June 6 when the water dropped a good 8 inches. We no longer needed to canoe to the boathouse but still needed rubber boots. A week later we were back to manageable levels.

With spring behind us, the weather by and large during the summer months was superb. There were few guests who experienced more than one day of rain during their week stay. And yet it would down pour at night or very occasionally during the day just enough to keep things moist and eliminate the concern for a fire ban. The last week of September was not so kind with rain and cold temperatures but warmed up and dried up in October.