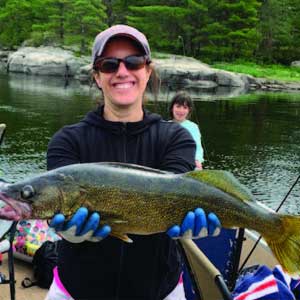 The walleye contest winner is Nolan Erickson from Raleigh, NC who caught a 28.5” walleye using a jig. Date caught was July 26.

The largest pike was a very nice and fat 42” caught & released by Butch Kline. Butch was using a mepps musky killer and caught it on October 1.

For the first time, we have a tie. Alec Hillyer from Ohio and Philip Lee from Toronto both caught a 20.5” bass. We had not encountered this scenario until now and talk about a heated discussion about how we are to handle it! In any even we decided on a split win; 2 night to Alec and 2 nights to Phil. Feedback on this is most welcome. Alec caught his bass on July 24 using a ocho worm lure. Phil caught his on Sept 11 using a popper.

Tom Lumsden from Maryland landed and released a very nice 50” musky on September 24 which titled him 2019 musky contest winner.

All trophy fish are eligible for our trophy draw and we’re excited to announce that this year’s winner is Simmie Lewandowski from Toronto who on June 22 caught a 24 walleye using a worm. 19 1/2” bass using worm.

Congratulations Nolan, Butch, Alec, Philip, Tom & Simmie. We look forward to hearing from you to book your 4 night stay in 2020 on us!